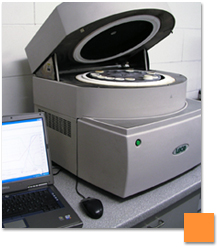 The thermogravimetric analysis measures a sample’s change of mass depending on temperature and time. The sample is heated to 1000°C in a crucible made of temperature-stable and inert material (platinum or Al2O3) and the change in weight is recorded. According to requirements, up to 19 samples can be heated simultaneously either in oxidative conditions (air or oxygen) or in a nitrogen atmosphere, in order to avoid oxidation.

The reduction or increase in weight and the temperature of the change in weight can draw conclusions from the composition of an analysed sample.

Change in mass can have the following reasons:

Thermogravimetric analysis is applied inter alia for identifying the moistness respectively the water content of volatile compounds (e.g. plastics with films of oil or plasticisers), the carbonate level and the loss of ignition respectively the residue on ignition. Furthermore, e.g., the percentage of metallic iron can be identified in a combination with XRF, which analyses the total percentage of iron.

In the field of coal analytics it is possible to measure the mass percentage of volatile components and even the ash content can be quantitatively determined by the change of mass. In order to determine the moisture analyses, the sample is heated from room temperature to 110°C. Keeping this temperature for 1 minute and measuring the change of mass measures determines the moisture of the sample. Finally the sample will be dynamically heated to 900°C. By changing the used gas of the gas atmosphere from nitrogen to oxygen further oxidation of the carbon takes place. The change of mass during this reaction determines the amount of carbon in the sample.

This website uses cookies to improve your experience while you navigate through the website. Out of these cookies, the cookies that are categorized as necessary are stored on your browser as they are essential for the working of basic functionalities of the website. We also use third-party cookies that help us analyze and understand how you use this website. These cookies will be stored in your browser only with your consent. You also have the option to opt-out of these cookies. But opting out of some of these cookies may have an effect on your browsing experience.
Necessary Always Enabled
Necessary cookies are absolutely essential for the website to function properly. This category only includes cookies that ensures basic functionalities and security features of the website. These cookies do not store any personal information.
Non-necessary
Any cookies that may not be particularly necessary for the website to function and is used specifically to collect user personal data via analytics, ads, other embedded contents are termed as non-necessary cookies. It is mandatory to procure user consent prior to running these cookies on your website.
SAVE & ACCEPT